For more than a decade, the Internet has influenced all the spheres of human activity, and music is no exception. There's been a complete flip in sales of physical vs. digital music, so buying a CD or a vinyl is a rare thing to do. Instead of going to a local record store we'd rather go to iTunes Store and purchase an album for $15 with a few clicks.
On the other hand, there are free music sources like Youtube and SoundCloud which provide millions of songs free of charge. However, the quality of those tracks leaves much to be desired. A happy medium in this situation is music streaming that for a relatively small price offers quite a lot, and not only songs but podcasts, radio and video content, as well.

The majors in this area are now Spotify, Apple Music, and Google Play Music. But, music streaming is a shaky area so we can't expect zero competition since young challengers are constantly encroaching the market and can easily surpass the leaders.
Today, we are taking a look at Google Play Music vs. Spotify vs. VOX Cloud comparison. The latter is a newcomer, but it can quickly become a streaming boss. Anyway, they all have pros and cons, so let's start.

Google Play Music is a great streaming service for devoted Google fans as it provides a music collection of 35 million songs, hundreds of playlists, podcasts, and video content. Once you subscribe, you also get a music cloud for up to 50, 000 of audio files (with strict restrictions to formats). Not that good if you prefer Hi-Res music.
Once you buy Google Play Music, you get Youtube Red, which allows you to combine Youtube's music collection with streaming's library. That's an ultimate solution because there are no ads, but again, the quality is frustrating.

Spotify Premium also has quite a lot to offer.  Its music collection numbers 30 million songs, thousand of playlists of all kinds, podcasts, videos, and radios. It also operates and a social network, where you can follow friends, share separate songs and playlists and recommend music. Premium subscription includes Spotify Connect which lets you listen to Spotify music with different devices including Sonos, Amazon Echo, PS3 and much more.  As well as Google Play Music, Spotify emphasizes quantity rather than the quality. It streams at 256 kbps Ogg Vorbis. There's also so-called Spotify Hi-Res, but actually, it's not pure Hi-Res.
Learn more about Hi-Res music
Playlists is a separate thing to discuss since there are "The Very Best of [artist's name]," mood playlists, genre and era playlists. Some of them seem pretty amateur since you can as well find Drake's last album in "90s' Hip-Hop collection". There's a free version that gives the same features excluding Spotify Connect and adds very annoying and obtrusive ads that forcefully encourage you to buy Premium subscription.

VOX Cloud (formerly LOOP Unlimited Music Cloud Storage) is a music cloud that stores all your music regardless of the format or size. It's used together with VOX Music Player for Mac & iPhone. Although here I'm talking about music streaming services VOX Cloud can also be called so since you first upload and then listen to what you have there.  VOX Cloud is a part of VOX Premium.

Why is VOX Cloud different from other music storages?

You download VOX Music Player for Mac & iPhone, sign up for VOX Premium account and then upload your entire collection to the cloud. Then you've done that, you can listen to all your music, anytime, anywhere. Moreover, if you're not good at creating playlists, you can connect to your Spotify and SoundCloud accounts to combine all three sources into one app. 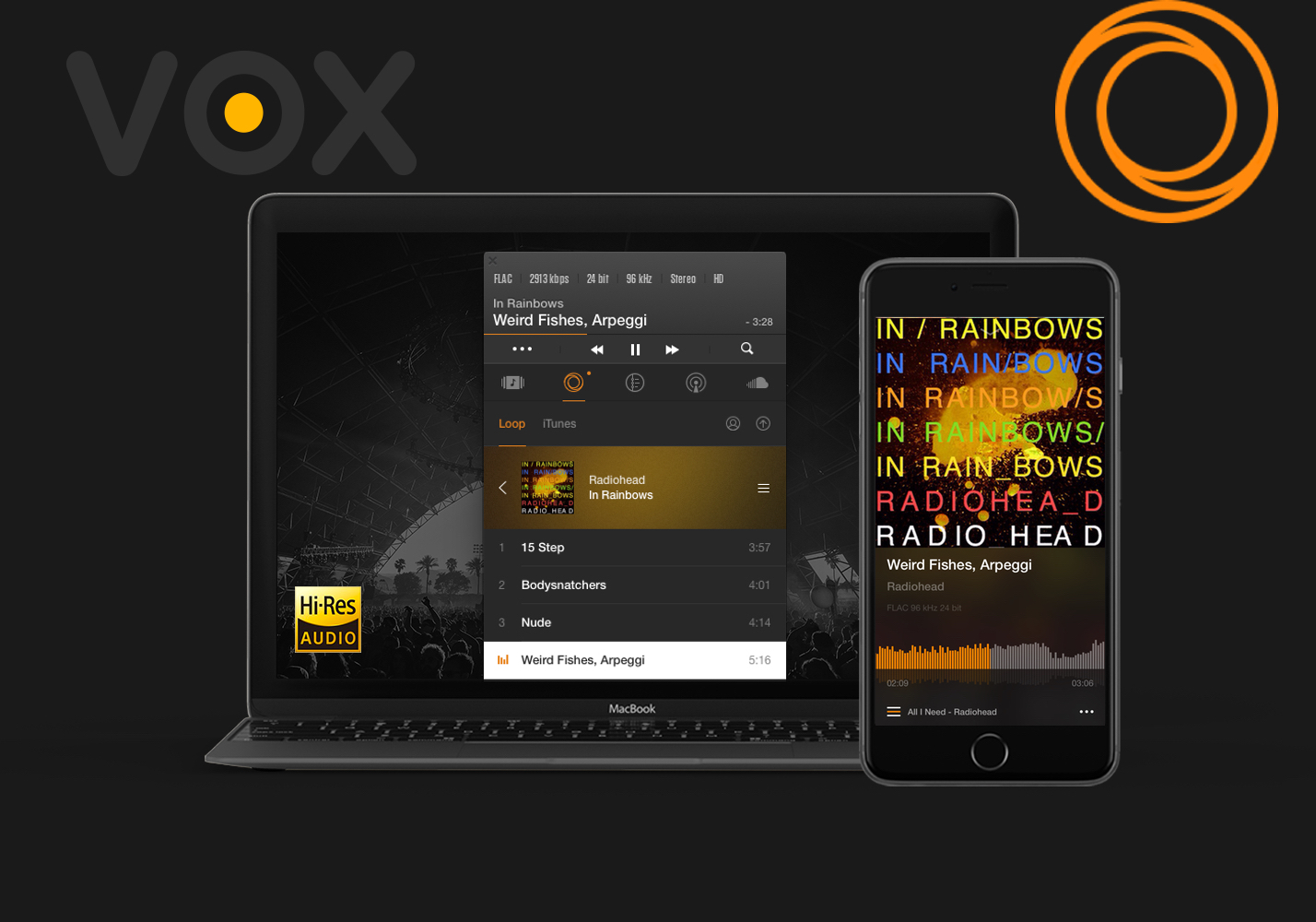 Concerning the last point, I should say that it does require some efforts, but the upload is fast. I managed to upload 3 GB of Hi-Res music in 5 mins.

Although there's no apparent winner, I prefer VOX . The reason is that I value the quality of sound, and when I've uploaded 150 Hi-Res albums and connected my Spotify account to discover new music, VOX Premium appeared to be a perfect tool for high-quality playback combined with huge Spotify collection.
Learn more about VOX Premium features

Enjoy the chills with VOX Premium