If you've read the announcement about Spotify Hi-Res and already want it, hold on and read why it is a common delusion

When the compressed music came out, people reckoned that it was only for some time, that the quality would improve. However, lossy music rapidly gained its admirers due to file's small size. It looked very appealing to be able to store thousands of songs no matter what the quality is. Sadly, compressed music was in favor for quite a while, at least, longer than it should have. As a consequence, musicians waste hours and days in studios re-recording what they think of, quantity has taken over quality and what appeared to be a bliss turned out to be evil.

Digital music streaming services is not a brand-new thing. The problem is that there’s so much music to discover and even though some services say they have some exclusives, most music collections are more or less similar, making possible over 30 million tracks for streaming.

Spotify doesn't need any kind of introduction. If you don't know what it is, you must be living in the Stone Age.

For those who still haven't googled, Spotify is a digital music streaming service that offers access to millions of songs, playlists, and podcasts from artists all over the world. It rapidly extended as a nice streaming service for several reasons:

It seemed like an outstanding service, but the world is now shifting towards Hi-Res music, and Spotify has no victory there. Today I will explain to you why Spotify is already in the past, Spotify Hi-Res is no Hi-Res and suggest a better alternative.

Like the rest of music streaming services, Spotify uses compressed audio files so that you can stream and download music without pauses or interruptions. Streams are in OGG (Ogg Vorbis) at 96 kbps on mobile, 160 kbps for so-called "High" quality on mobile and 320 kbps on mobile and computers for Premium subscribers. These digits are enough to refuse to use the service. If you reckon it makes no difference, you can check out the short-film The Distortion of Sound, where Slash, Snoop Dogg, Michael Shinoda, and the rest will explain in detail why compression is no good for 2017. The worst thing about compressed music is that loudness entirely predominates over the quality thus making the sound more ripped and not exactly what was recorded in a studio. Louder doesn't imply better music experience, and right now is the time we accept it. 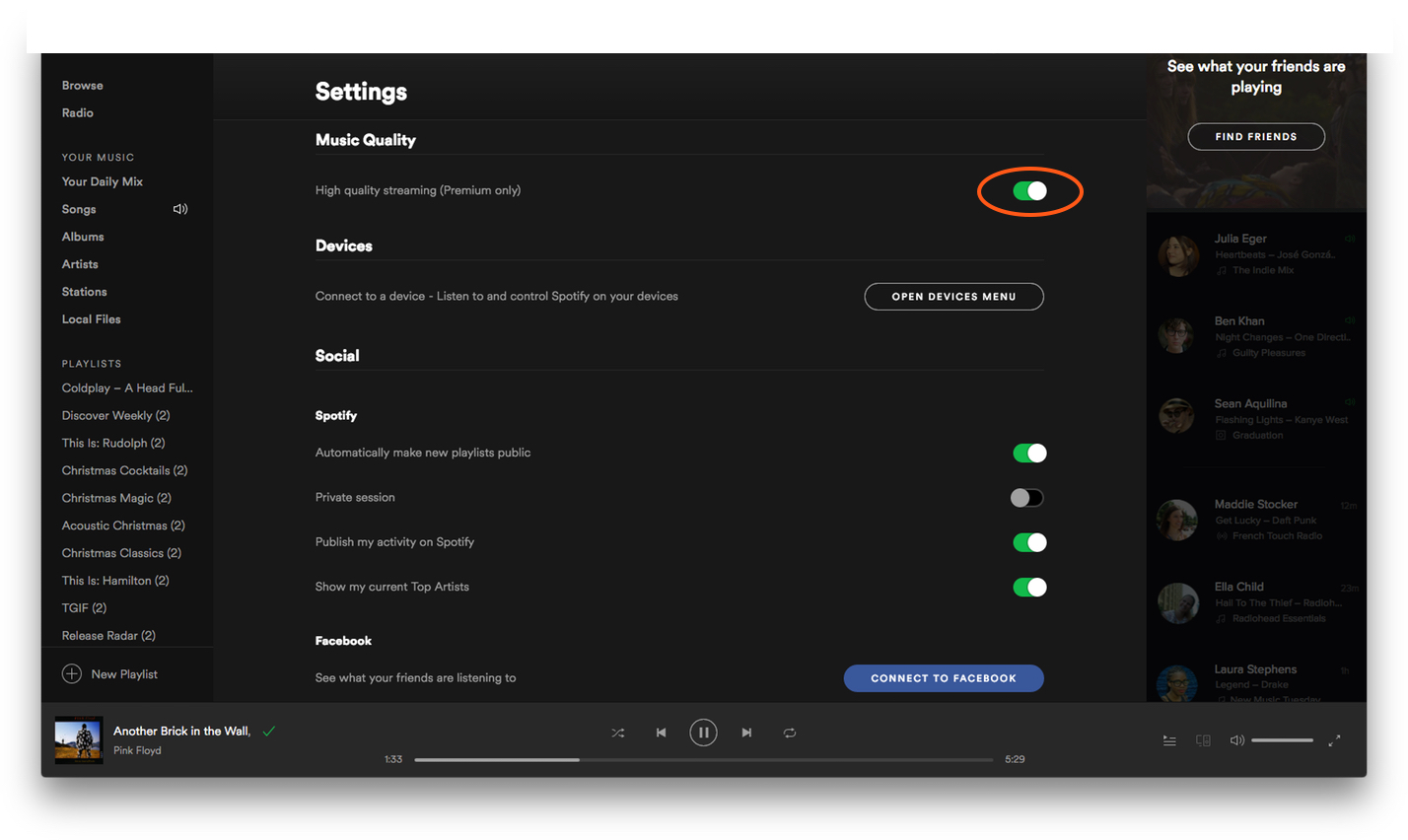 There's been lots of hype around Spotify's announcement about the introduction of so-called Hi-Res Premium account. For extra $5-10 (it randomly varies from account to account) you are offered an opportunity to listen to CD quality at 44.1 KHz/16 bit frequency while real Hi-Res starts at 48 KHz/24 bit. Sure, CD quality is better than compressed OGG but is it worth it? I doubt. The only player able to support playback of such quality is VOX Music Player for Mac & iPhone, where you don't think about the quality because you know for sure what you've uploaded.

Spotify should make it more comfortable to find songs because if there's at least one misspelled letter, it would be hard to find what you've been looking for. Another annoying feature is that you can't put the songs in any kind of order which makes it really challenging to find any song. If you are listening to an album, and then add songs one by one, what you eventually have is that exact album but with songs in reversed order. Storing music a bit pain in the ass, so you have to think in advance in what order you want them to be on your added music list.

As an alternative, VOX Music player has its own cloud storage called VOX Music Cloud Storage. It is a limitless cloud which has only one purpose – store all your Hi-Res library thus tackling the problem of Hi-Res file's size. It instantly syncs with you VOX account so you can enjoy the music you have on the cloud. Additional great feature is the option to download songs, which may be useful if you know for certain you won't be having any internet for some time.

What Spotify calls Radio is actually just a set of pre-made playlists of different genres. It is also common that these playlists confuse some algorithms and you have EDM music playing on an Alternative channel. Discovering new music narrows down to Browse. It has dozens of playlists and to know how the playlists work there, read the next section. 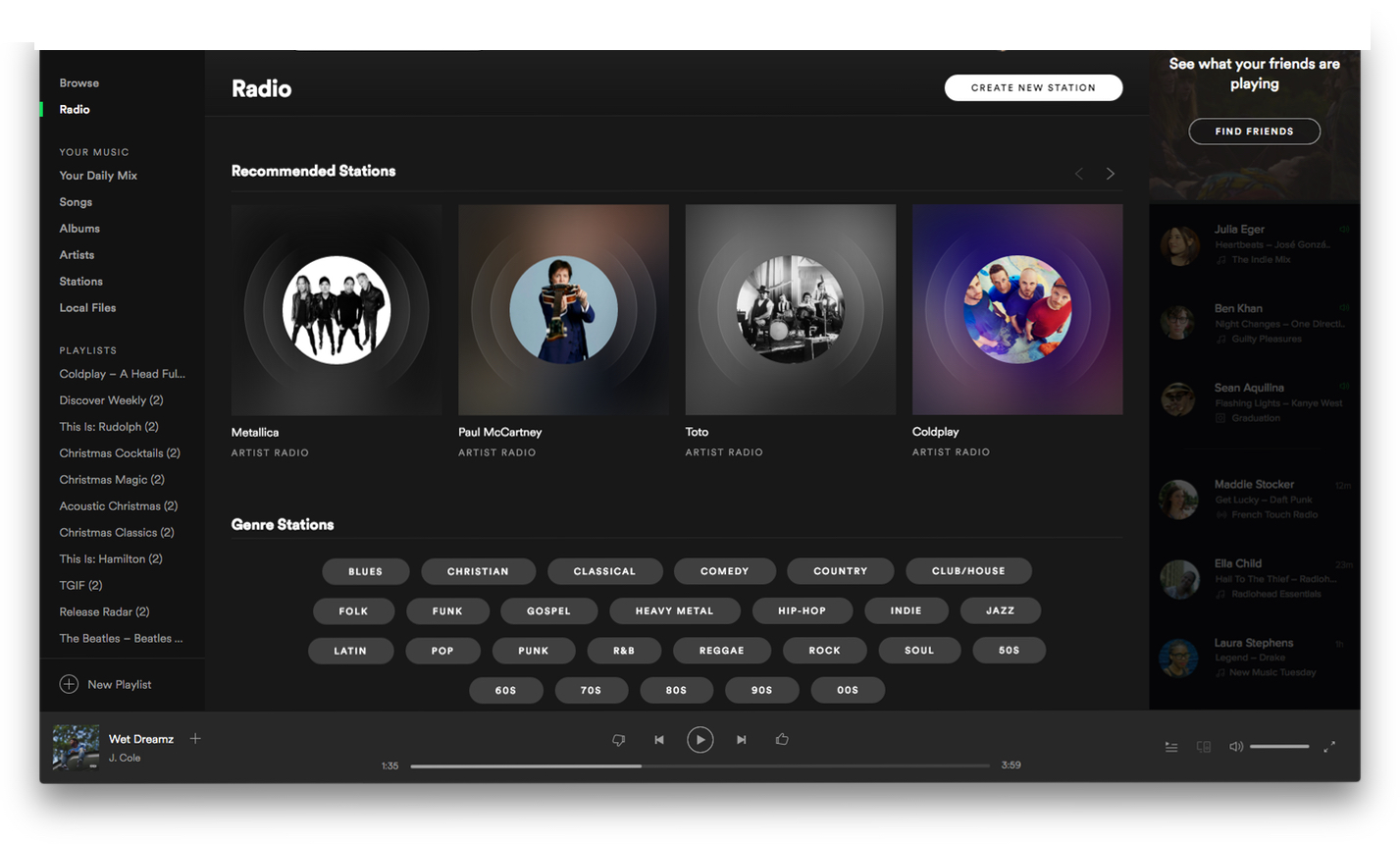 For people who tend to explore new music with radio, VOX Music Player makes it possible to listen to more than 30,000 stations from all around the world. It appeals to any taste regardless of the genre or country.  You will always find new music and be able to explore new genres with no problems.

Playlists, as well as radio, focus on assisting people with exploring previously unknown artists. Spotify has millions of pre-created playlists starting from "The Best of ... [band's name]" to Top-50 of a country you pick. Unfortunately, Your Daily Mix section is based on what you already have on your music list, so there's little chance to actually discover something new, local or underground. Another flaw of Spotify's playlist is that they usually offer most popular tracks of a particular genre or musician. For example, if you regularly listen to some trip-hop, you will most likely find  Portishead, Tricky, Massive Attack and the rest of the genre bests on your Daily Mix.

VOX Player doesn't provide pre-made playlists since we believe playlists are very personal and private. Musicians usually spend hours in studios creating something unique not to be put in one line with hundreds of different artist just because someone decided they sounded alike.

Streaming services have made their contribution to humanity, but it's high time we moved into the future, and it's all about Hi-Res music. We strongly encourage you to stop hurting your ears and choose the best alternative to Spotify for your iPhone. VOX Music Player has everything and more and can satisfy the needs of even the most demandable listeners.