Please try to re-login to the VOX Universal app using your VOX Account to trigger the complete re-sync.

Also, you may try to do the following:

If nothing of mentioned above had helped, please do not hesitate to reach our tech. support desk https://vox.rocks/support and get some individual assistance.

Thanks for the reply!

First of all, NOTHING comes up, then when I upload one track, ALL my albums are displayed, with cover art, file type etc., but when clicked on, the album is empty / there are no tracks displayed.

Anyone else have this problem / a way to get around it?

I’ve had the beta installed for a while but find myself drifting back to the original in spite of the beta’s much more enjoyable UI. Two things bring me back: BS2B (which is terrific) and the ability to drag my local files to the playlist and hit shuffle. I’ve come to really appreciate that as it’s local, no data is being downloaded, there’s less drag on my internet speeds, it’s not firing up servers somewhere so it uses less energy, etc etc. hope those 2 features make it to the universal!

Looking forward to getting these issues resolved. I’ve been waiting for a universal player ever since I first subscribed to VOX three years ago!

Thanks for make VOX better, I love your player it’s not the best right now but for me it’s the minimal and beautiful player in the world

How to merge artists?

Or, alternately, tell it to use the actual “artist” tag instead of “album artist,” which is what is giving me multiple entries for certain artists with complicated names. When I try to rename an artist it tells me “artist already exists,” but I just want to merge them together?

Haven’t messed around much with playback here yet, because there’s no last.fm support.

I’m not sure if this feedback is still being checked… I’m sure several users have run into this same issue.

There is a serious flaw going on with the ability to edit Metadata! If you edit the name of a track (Title/Album/etc) and you then try to revert back to the original you get a big red error saying it already exists…

How are we supposed to test the functionality of this new feature if we are unable to revert changes?

This same issue does not allow us to combine to groups of tracks into a single album, or combine two artists as a single artist. Being able to do so is the main benefit of being able to edit metadata from within VOX, so I hope this issue has been noted.

As for now, meta editing is fully supported for Playlist items, since they are not involved in the Library hierarchy creation, hence, fully scaled meta editor for Library, with an ability to merge Albums, Artists and move tracks!

Regarding the renaming bug. Please reach our tech. support desk https://vox.rocks/support and share the logs and some steps to reproduce the issue.

I am sure they will find a workaround for this happening and collect all needed information to reproduce and fix an error.

Really like the improvement on the Universal Beta. I have a suggestion. This is the issue: I have an album with a duplicated artist name but with different meta on the name. I was trying to edit the meta tag on the artist name to have just one, but I get this error message: Artist with that name already exists. That was the whole point of being able to edit the artist name, to show several albums under the same artist name. 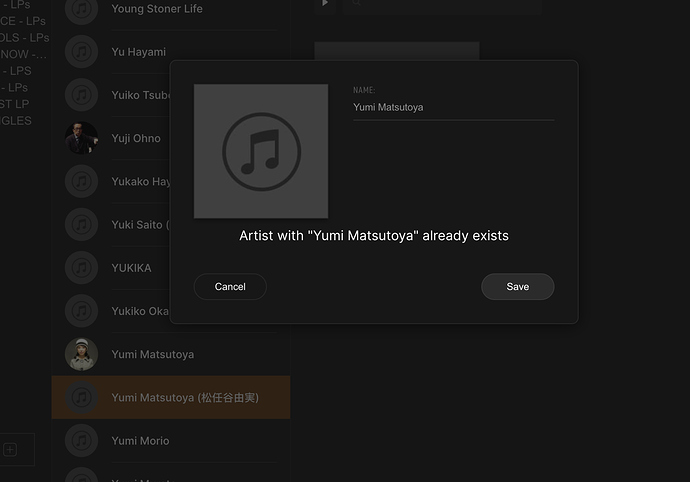 I don’t find the option to download files in the Universal Beta is that going to be added later on?

I cannot even open this app. Here is what I get when I try to open it:
“VOX Universal” can’t be opened because Apple cannot check it for malicious software.

The app itself seems to work fine for me on Windows 10, but uploading absolutely murders the bandwidth. Everyone in my house is affected by it. That definitely needs to be fixed.

Edit: It seems to struggle when I upload my entire music folder. It starts to upload, but then stops until I restart the program. When I do one artist at a time, there’s no problem.

Still hopeful that the “local file playlist” feature makes its way over from the mini app. That’s constantly in use.

Any chance we could get a list of which metadata tags you guys are planning to support with VOX Universal…?

I feel like certain tags are almost mandatory these days if you want to be able to organize a large music collection:

It would be really nice to at least see some support for the following, as these tags are pretty universally supported by even the simplest media players…

Eventually it would be nice to get support for creating Smart Playlists using various ID tags such as:

I understand that some of these will take time. However, it would be much appreciated if we could get a list of what your plans are so we know what to expect over the next 6-12 months…

I accidentally used “Heavy” as the Album Artist in the Mac Music App for Iron Butterfly’s debut album, before adding it to Vox. Is there not a way to correct an album’s Artist field? I tried renaming Heavy from the Artists list, but Iron Butterfly already exists. 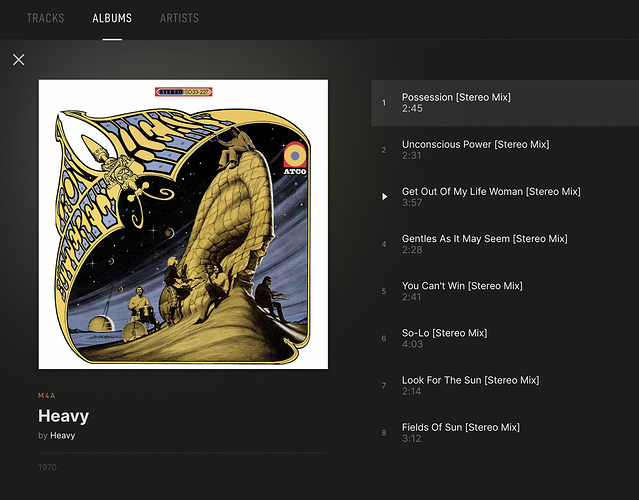 Feature Request: Would love to see an equalizer option. I have some hearing loss and prefer not to listen to music with my hearing aids in and would rather just adjust the EQ. Thank you!