You can find the most recent version of the VOX Universal app here: https://vox.rocks/forum/t/vox-universal-beta-release-notes/12980

By signing up as a Beta tester of the VOX Universal app, you will get early versions of our new cross-platform app during Open Beta Testing sessions before we release the final version and share it with everyone else.

To Sign Up as a Beta tester during the Open Beta Testing sessions you need to do the following:

What we expect our Beta Testers to do:

Your attendance is a great help for us, as it allows us to find issues and fix them and your feedback will guide us during the development of the new features!

For any additional information reach our tech. support desk https://vox.rocks/support

Looking forward to your feedbacks!

Your assistance is appreciated.

Please reach our tech. support desk https://vox.rocks/support to have it sorted!

Hi Vox Team,
First of all, I use Vox since the begin. I like it very much for many reasons like :
• Perfect sound playback (as good as Audirvana for exemple)
• Perfect Audio Unit integration

I’ve download the VOX Universal beta and I don’t understand what are you doing …
The User Interface is better … OK … but you where very closed to the perfect app … why changing the way to integrate the music. I’ve try to upload 2 albums … it takes many times … Why ? The upload is in the cloud ? If yes … why ? We only need to import local files and have the ability to use a streaming service like Spotify … and that’s it !

In the beta version for windows, the music is cut between tracks, that is, the album does not sound often.

Same with the MacOS beta version! Please fixx this soon, the official version is getting extremely slow and almost unusable on a Mac running Big Sur!! 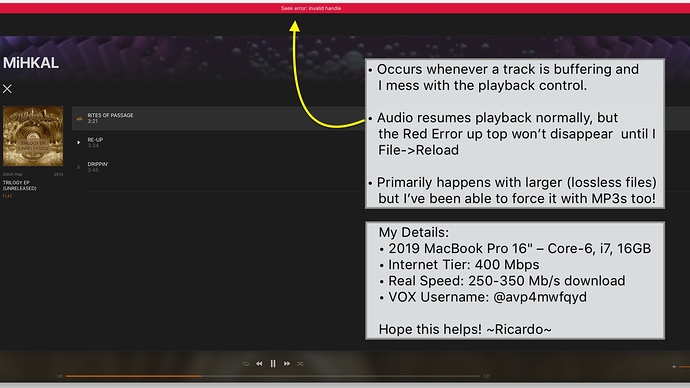 Happy to see you’ve been hard at work. I’ve been working on an app myself, so it’s nice to focus my time on something more fun than debugging for a change… I have included a few suggestions for additions based on the new features you’re already implementing. I realize extras will come later, but I’ve added them in just in case.

The image I embedded has my notes on the first issue I encountered (several times) today. So it’s probably easier to read that…

Question: should we uninstall the previous VOX (v 3.3.xx) app? I encountered some issues with my metadata in the old VOX a few minutes after editing a file’s metadata using the beta. I can’t remember what happened, but it was an easy fix and it might’ve been because I had both builds open simultaneously - so I’m not too worried about it.

Editing Metadata: This is definitely going to make a lot of users happy!

Is AirPlay or the BS2B features going to be added to one of the upcoming builds for us to test?

Can you explain how Collections (Playlists) work in VOX…

I have been experiencing some issues with this on the Beta, and that made me notice that this also occurs on the older version as well.

So, let’s say I upload music to VOX Cloud and then add some of those tracks to a Collection. If I then delete a song or album from my VOX Cloud it still somehow exists in Collections. How is this possible? Is a new copy of the file being created from the one I uploaded to the Cloud? I confirmed this was happening in both versions of VOX, even after refreshing the app and even uninstalling/re-installing in one case.

If so, isn’t this essentially doubling the storage space every time I add a song to a Collection? Also it causes a lot of confusion as far as Metadata is concerned. The beta allows you to edit the tags for a track, but since its a separate file (and not just an alias of the main file) your allowing the user to change the name of a track in collections without it also changing in their library. I was surprised when I saw this, and had to test it a few more times to confirm what was going on.

*Side Note: when editing Metadata in Collections, you are given the option to edit the Title, Album, Artist, all simultaneous, so that would be a good thing to allow in Library (for Track view perhaps).

Is your VOX Cloud uploader working slower in the Beta? Mine is actually working much faster for some reason – although I just upgraded from 100 to 400 Mbps internet so my uploads are also much faster everywhere.

Do you have both versions of VOX open when the cutting between songs happens? I noticed that was happening while AirPlaying in my older version, but as soon as I closed the beta it started working normally again.

For one crazy minute my library appeared (after I had uploaded an album), but now nothing appears, messages are ‘preparing upload’ or ‘time out’ only. MacOS. Love the big window though! Finally

Albums came back! Such cool design… but only the (wonderfully big) cover art…

no tracks… maybe I missed something, but do we need to manually upload all the music itself again for the beta version, or just wait??

Is anyone reading these comments / going to reply?? The errors have stopped, but no tracks from my Vox cloud are appearing… what would you like us to do in this situation??

Thanks for your posts, we are glad to hear your feedback, please don`t hesitate to reach our tech. support desk https://vox.rocks/support to get assistance if you have faced any issues with VOX Universal.

As for the questions asked in your posts:

AirPlay should be already working in the current version, but the output manager is still not introduced in VOX Universal app, which means you would need to set your AirPlay device as a systems default to make it work.

Yes, VOX Universal is a VOX Cloud streamer and manager on this stage of the development, so you can expect your music to appear across all the devices authorized with your VOX Account, once you have added some music to VOX Universal, and vice versa.

One should be already able to edit your VOX Cloud library, delete or add tracks, rename items, etc. using VOX Universal on both Windows and macOS. We are looking forward to introducing Artwork management in next update!

I’ve try to upload 2 albums … it takes many times … Why ? The upload is in the cloud ? If yes … why ? We only need to import local files and have the ability to use a streaming service like Spotify … and that’s it !

While developing a new cross-platform app we’ve tried a bit different approach, taking into account users` feedbacks, but we love the VOX Music Player and don`t want it to be changed beyond the recognition.

On the other hand, we would appreciate any ideas on how to make it better, if they are in line with VOX philosophy.

Regarding the issues with the iTunes folder, please reach our tech. support desk https://vox.rocks/support to have it sorted!

May I ask you to share some additional details with our tech. support desk https://vox.rocks/support or here: