Well, the good news is that now the uploader actually shows when files aren’t being uploaded (in the earlier versions it would just upload and nothing would actually be added to the library).

The bad news is that it is not uploading.

Some screenshots with an error message visible would be appreciated!

The bad news is that it is not uploading.

I’ve downloaded the 2.17, above… was there an OTA update after that, or are we still waiting?

Hopefully it will be released by the end of the week.

We will update download links as well. Stay tuned!

An update for VOX Uploader has been released!

Good day to everyone! An update for VOX Uploader has been released! The new version 0.2.18 - is available here: [Donwload & Install for Windows\ 160xauto] Important! If you’re using VOX Uploader on Windows OS right now - to update to the new version we will ask you to delete the previous version (delete cache also) and do a clean install. If you need some further guidance - support@coppertino.com [Donwload & Install for macOS\ 160xauto] All macOS versions before v0.2.18 - should be upda…

Important! If you’re using VOX Uploader on Windows OS right now - to update to the new version we will ask you to delete the previous version (delete cache also) and do a clean install.

If you need some further guidance - support@coppertino.com

All macOS versions before v0.2.18 - should be updated over the air.

If you’ve faced some difficulties while updating, please contact us to get some further guidance - support@coppertino.com

If you have recently faced an issue updating on Windows 7\10 automatically, we would suggest taking the following steps to update the app:

Please contact us to get some further guidance - support@coppertino.com

Just downloaded the most recent version of the uploader and uploaded an album. Most have worked fine, but I have one album so far, with one song that refuses to upload. I have tried this with the uploader on Windows 10, with the uploader on Mac OS 10.14.15. This is a file that has refused to upload through the player as well as through the web interface. However, I can’t find anything wrong with this file. It is an ~90 mb .flac file that plays just fine on both machines. Is there some sort of error log I can share that would be useful?

I also have problems uploading a small number of .flac files, regardless of the uploader used.
This has been ongoing for some months, still awaiting a response/resolution.

Thanks for your feedbacks!

What says the error notification on UI when those files fail to upload via VOX Uploader app?
Can you share some screenshots with error messages on UI or an error text?

Also, we would suggest to contacting our support desk directly (https://vox.rocks/support) to get some additional guidance.

Now resolved with the help of Vox support. Their suggestion was to use MediaHuman Audio Converter to convert as required. I actually created the new files with exactly the same parameters as the originals, which then uploaded okay, with one exception: this file uploaded after I changed the compression level.
Don’t know why this all works, but am pleased that it does!
Thanks.

I downloaded the latest version of the Windows Uploader Beta yesterday. The first couple of albums uploaded without a hitch. I tried a few more but the the uploader stopped working. It’s stuck at 0.

What OS are you on? Windows or macOS? Do you see any error notification?

Did you try to use “Refresh” button or reboot VOX app?

I’m using Windows. Actually, I tried it again since I emailed you. I shut the computer off and then turned it back on. That solved the problem.

Here is a screenshot of three of the failed files. All of the other files have the same error message. 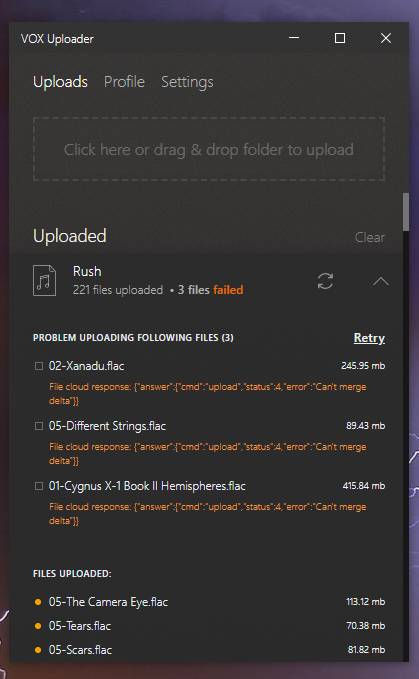 Ok, another update. After the recommendation above about converting the file, I used dBpoweramp to convert the 4 files that have failed. I did a lossless .flac conversion and then uploaded the files and all four of the previously failed tracks uploaded. Seem to take a little longer than usual, but they successfully uploaded.

Not sure what the issue is with the original files. They were all purchased through HD Tracks, and initially attempts at uploaded were unaltered files that all played just fine in VLC, Groove (on Windows) and iTunes (on the Mac). 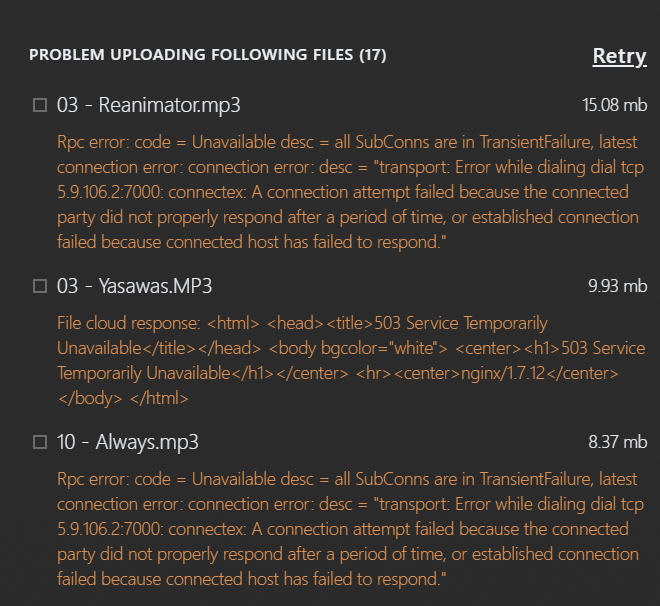 VOX Uploader is on maintenance right now. We do our best to get everything updated and back online, ASAP.

We will keep you posted here!

Currently, we suggest using web-tools or VOX for macOS to upload your new music files to VOX Cloud

Learn more here: How to upload your music to VOX Cloud

VOX Uploader BETA is back on the track again.

@VOX_Support_Team Do you have news about the feature preview in BETA uploader to watch new files in a folder and upload it?

As for now, we are using all possible resources to finish, test, polish and release a ReVOX Beta.

Probably, we will manage to introduce this feature already in ReVOX Beta, since ReVOX is going to have more capabilities and tools vs VOX Uploader.