Do you have news about new universal VOX app?
We’re waiting too long. Can you be honest with your customers and tell something about develop, problems, real situation.

I think we are already too many VOX customers waiting for an answer.

Maybe you can put something, screenshots, sneak peak or Testfight beta invitation.

I strongly believe in the future of VOX, but without news, it becomes more difficult to believe.

I grilled these people about this same thing on multiple threads, and they just gave me a smart ass answer. They don’t care about us and they are lazy as heck. I don’t think we will ever see this mythical app they refer to. If you go on LinkedIn, you can see all of the people who work on these projects. They are all in the Ukraine area.

Many times they have told me they would put me in TestFlight betas, but not a single one has been seen, and this was well over a year ago.

@VOX_Support_Team y’all have anything to say for yourselves?

Bump. Just checking in to follow this thread. I am also waiting to hear about. My subscription to the online storage ends in DEC. If there isn’t an answer soon, I will end my subscription and move my files elsewhere.

We really appreciate you stay active on this topic. I am sure that will encourage dev. team to code faster

Here come some news and ETAs from the VOX Team, as for today:

We are developing our product full-time and on the daily basis, we can`t stop killing bugs and making improvements to our infrastructure, polishing VOX app to make sure VOX will be working properly on new OS updates released by Apple, etc.

Supporting our products takes a lot of time and effort, hence, we’ve managed to increase the amount of time and human resources spent on making new Beta, and we are passionately looking forward to sharing them with our fans pretty soon.

Yet we think that it is important to emphasize that all our plans and ETAs we’ve shared above may be postponed if VOX Team will have to spend more time supporting current apps and infrastructure. And that is something we can`t know for sure now.

I hope our updates will please you! 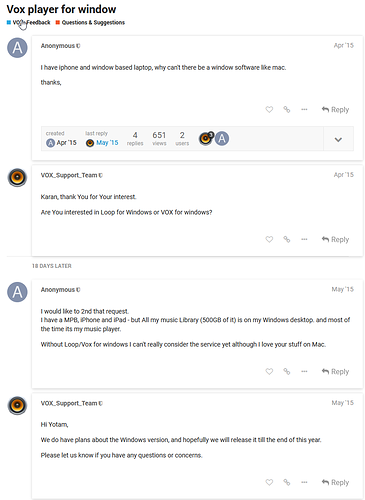 We work really hard to make it happen according to the schedule. Anyway, we will find out soon.

Here come some news and ETAs from the VOX Team, as for today:

Give us some more info pls.

Thanks for your posts!

ReVOX development is going on, we’ve bumped into a number of new tech. issues and currently we are working on resolving them, that is the reason for beta testing sessions to be postponed.

We hope to overcome the mentioned tech. issues, also we plan to finalize beta testing environment preparations in the shortest time possible. VOX Team stays encouraged and focused right now and we are looking forward to releasing new beta during the upcoming months.

It might happen so, that the new iPad version of VOX app will be released first. If you are looking forward to trying out some new software, our tech. support will be glad to share invitations for ReVOX and\or iPad app testing sessions on your demand - https://vox.rocks/support

You guys are taking the piss. This can’t be real…

The app was planned for 2015- the android one 2014 even… It’s taken you 5 years longer. World Wars last shorter than this.
First you updated the community it’d be 2016, then 2017- then you said “we were working on it but it’s taking longer” and now that we finally got a concrete (as far as such a short list can be called concrete) roadmap, you guys still missed it. We are 6 years overdue and there still isn’t even an alpha version.

Not even that but seriously? Using windows tech issues as an excuse? I mean I know I’ve just responded in the other topic that I believe you, but seeing this I really start to doubt it.

Here’s the thing: if you were telling the truth, you’d have released an alpha/beta for everyone but Windows so that we know what’s happening and can give you guys feedback with the Windows release coming later.
Or- you’d have shared screenshots.

We know nothing about this app after 6 years of development. We don’t know what features it has, we don’t even know what it looks like. Not even concept designs!
In the meanwhile I read things like “Yeah we plan adding Youtube Music support. Yeah we plan cloud support. It will all be in the new app” even though you can’t even get a Windows app to work.

If this doesn’t scream vaporware I don’t know what does. Guys, if you depend on this new app- please stop supporting these phonies until they can proof they ARE actually working on this. I don’t like to do this, but what’s the point in supporting baseless promises? I mean all VOX has to do is make a blog post and update us on the progress and share screenshots. If you ARE working on the app, it should be the easiest demand to fulfill!

Also, as a fellow app developer who has worked with a lot of different cross platform frameworks- there’s no way, even for a small company, that it’d take this long.

And lastly: I have respect for you guys, VOX. Don’t get me wrong. I don’t write this angry comment because I hate you guys. The opposite actually- I love that you provide us with lossless music uploads- still, after all these years! I know being a small company with limited resources is tough. Being a successful music locker service is even harder- no big money can be made from this as other companies have proved. Your current apps work and were great back in 2013, but they really start to show their age.

But I am writing this to hopefully wake you guys up. You need to be more transparent to your loyal fans because keeping silent is just going to hurt and destroy you in the long run.

Great comment above. Although I am less interested in the much-coveted universal VOX player, I do agree that new features are frustratingly slow to arrive.

I do wonder if this is the side gig of someone working an otherwise full time job? If so, then fair enough because for what it is and what it does, it does in the main work very well.

Hey!! Vox Team do you have news about ETAs? We didn’t hear you.

We need some information about develop of reVOX apps

Thanks to all of you for your posts!

We’ve brought some good news for those of you who have wanted to try out an iPad version of the VOX app (with a Split Screen support, Landscape mode, etc.) You may use the link to join the VOX beta testing sessions via the TestFlight app!

Please consider that it is still a raw build, and there are a couple of known bugs that going to be fixed in the upcoming updates, however, we couldn`t wait any longer and decided to share this build with you, so here it comes: https://testflight.apple.com/join/JTUnoAJ6 (Using your iOS deivce)

This version includes both iPad optimizations fixes, as well as regular iPhone layout updates, in other words, if you don`t have an iPad, but you would like to get a new version - you can go with your iPhone!

Don`t hesitate to reach our tech. support to provide us with your feedback, report bugs, or to get some assistance! https://vox.rocks/support

Trying it with my iPad 1 day out and the link is already dead.