Hi there,
after Apple messing up my playlists and music libraries for too often, I am looking for an alternative.
Vox looks good, but there does not seem to be a way to import a specific Apple Music App Library; there’s an option for iTunes import, but I don’t have iTunes anymore. also I have several Music libraries and backups, and I need to select a specific library for import.
Is there any way to do that?

VOX app auto-syncs your local iTunes library on iOS or macOS, so you can expect to find your new music in VOX after you added new music to iTunes.

In order to initially sync your iTunes Library to VOX app:

I’m a few months into this exact same process for the exact same reason. Here’s where I’ve ended up…

For desk listening, I just drag an album folder on VOX’s local playlist: 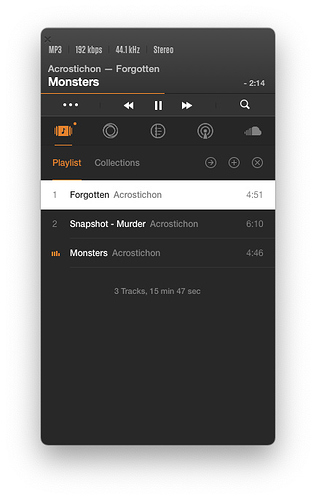 I didn’t find a magic bullet to switch over, but once I got my feet on the ground and accepted it was going to take some time, I stopped missing Apple Music entirely. At this point, I only open Apple Music to stream and check out new stuff. Everything else is VOX, at my desk, in my car, out on a walk…

There are some occasional bugs, but I’m way, way, WAY less frustrated than I was in Apple’s Music.app.

And Meta is a really great app.

Hope some of that helped!